In this post I will use incentives for sales representatives in pricing to provide examples of factors to consider when attempting to influence an existing distribution.

For instance, if you have a lever that pushes prices from low to high, using the lever to influence the prices adjacent to the right of the largest parts of the distribution will (likely, though contingent on a variety of factors) make the biggest impact on raising the average price attained. If the starting distribution is normal, this means incentives applied near the lower prices (the tail of the distribution) may have the smallest impact.

All figures in this post are created using the R programming language (see Rmarkdown document on github for code).

Imagine you have a product that can be sold anywhere from $100 to $150. Sales reps want to sell for as high of a price as possible and customers want to purchase for as low of a price as possible. In this tension your product ends-up selling, on average, for $125 and follows a truncated normal distribution with standard deviation of $101. 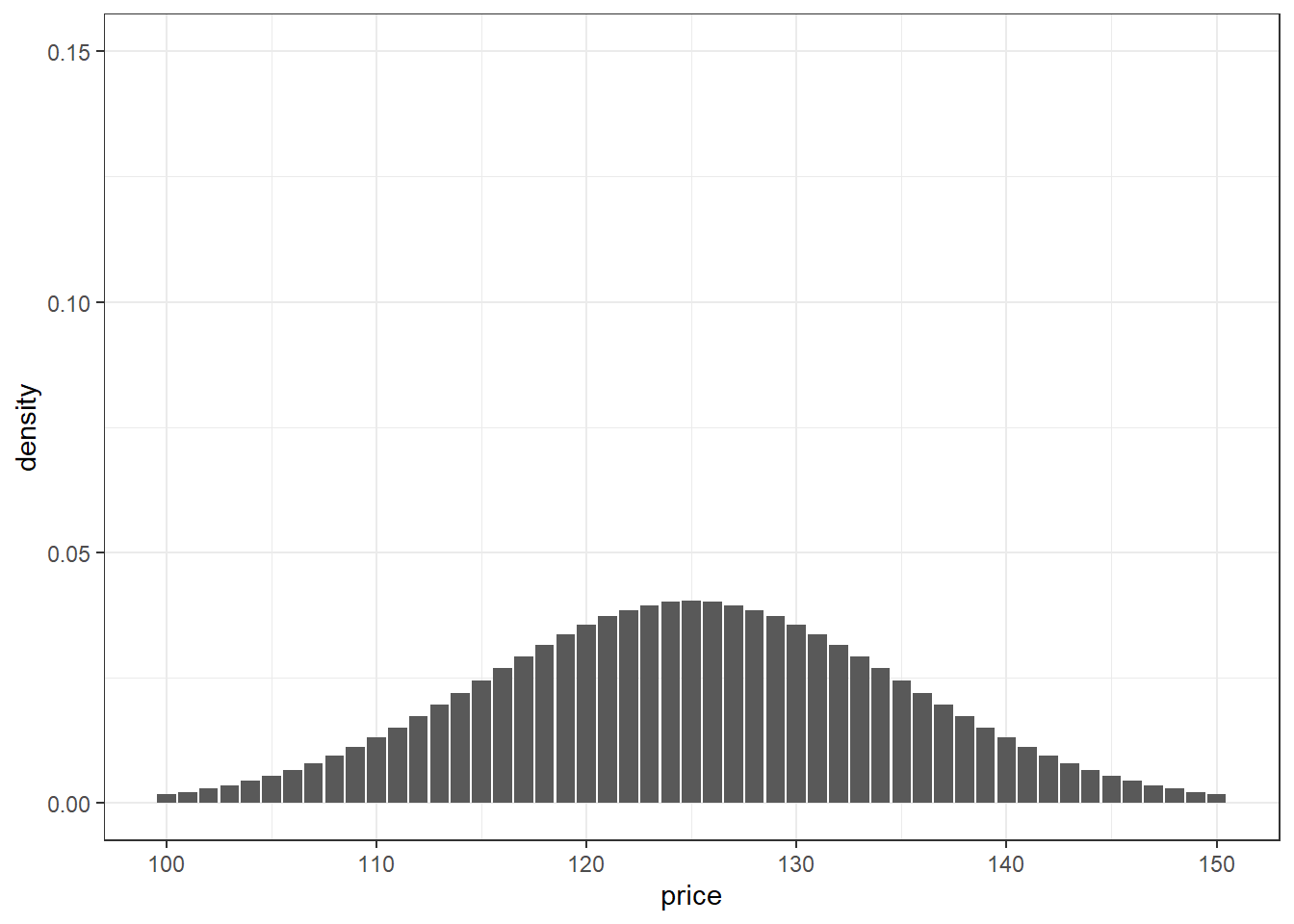 Applying such an additional incentive on sales teams has the potential advantage of pushing some proportion of deals to a higher price3. There are also Trade-offs associated with such an initiative (indicated in the Appendix), these will be ignored for the purposes of this exercise.

Say you decide to set cut-points to split the distribution into quartiles such that sales reps get larger bonuses if their deals fall into higher quartiles. 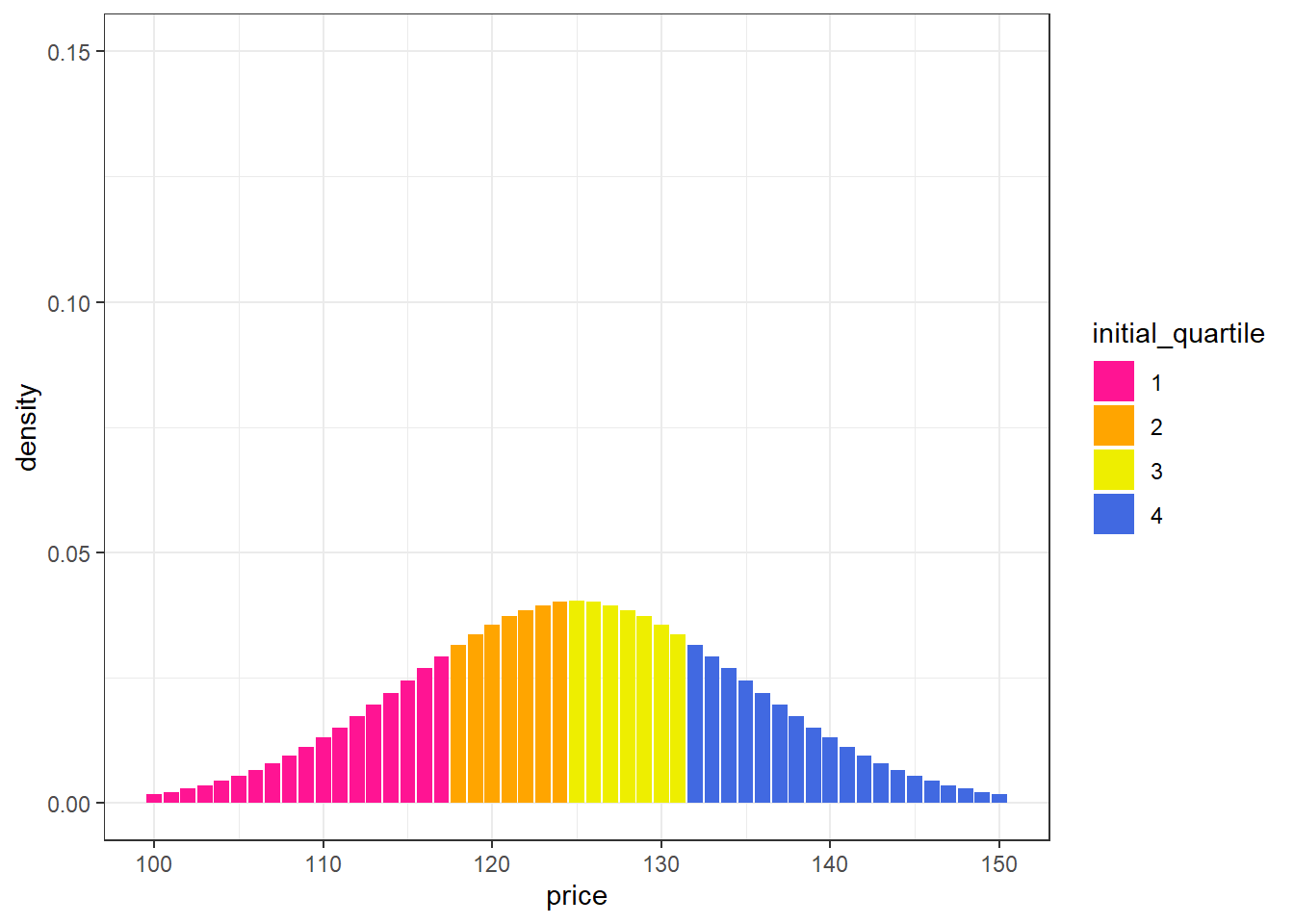 Applying incentives is likely to lead to a different distribution for future deals.

After applying incentives the resulting distribution is likely to depend on:

You could paramaterize this problem and model the expected distribution. Making some Simple Assumptions (described in the Appendix), the chart below shows a (potential) resulting distribution after applying the incentives. 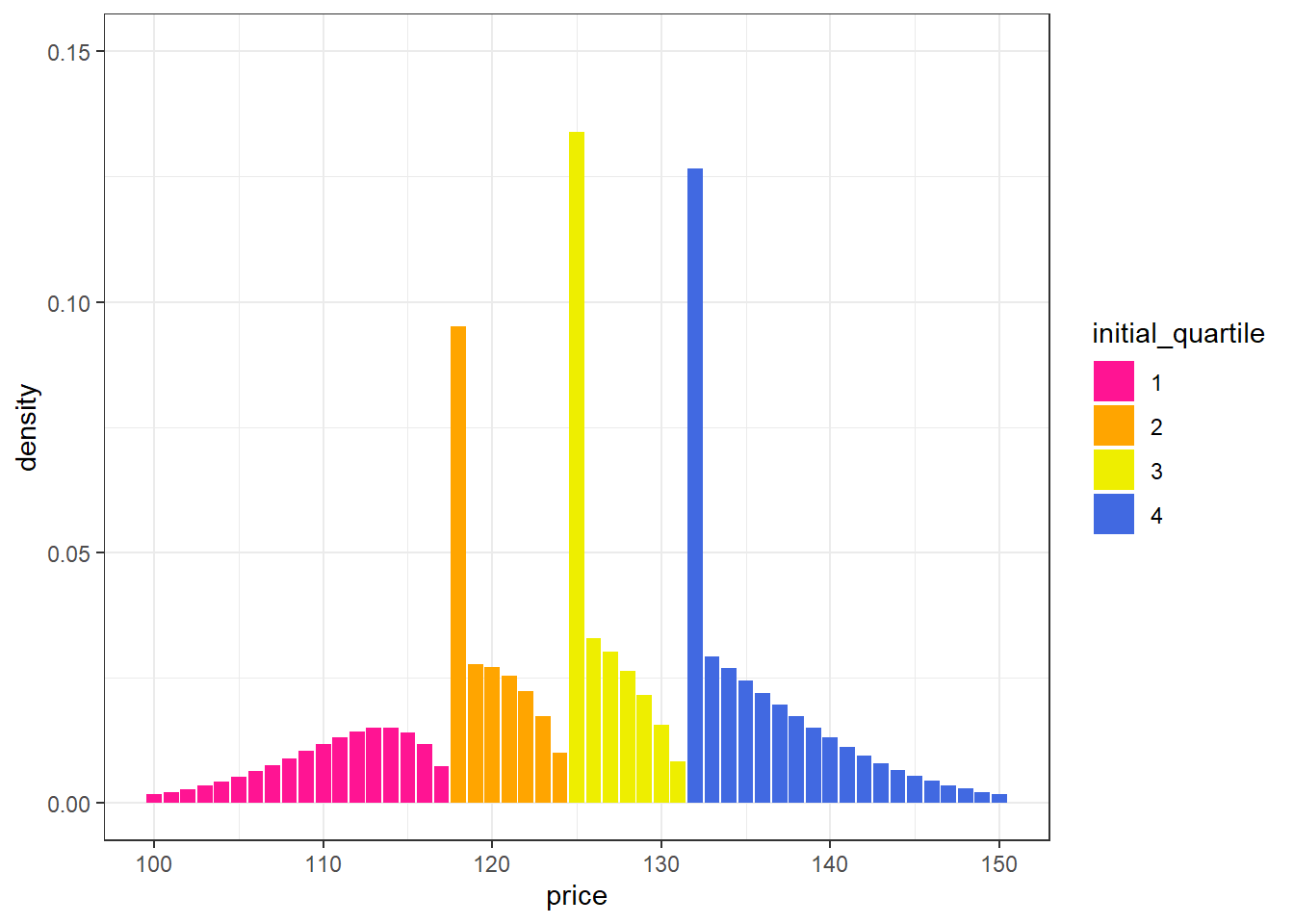 Gray bars in the chart below indicate where (on the original distribution) movement to a higher tier will occur. 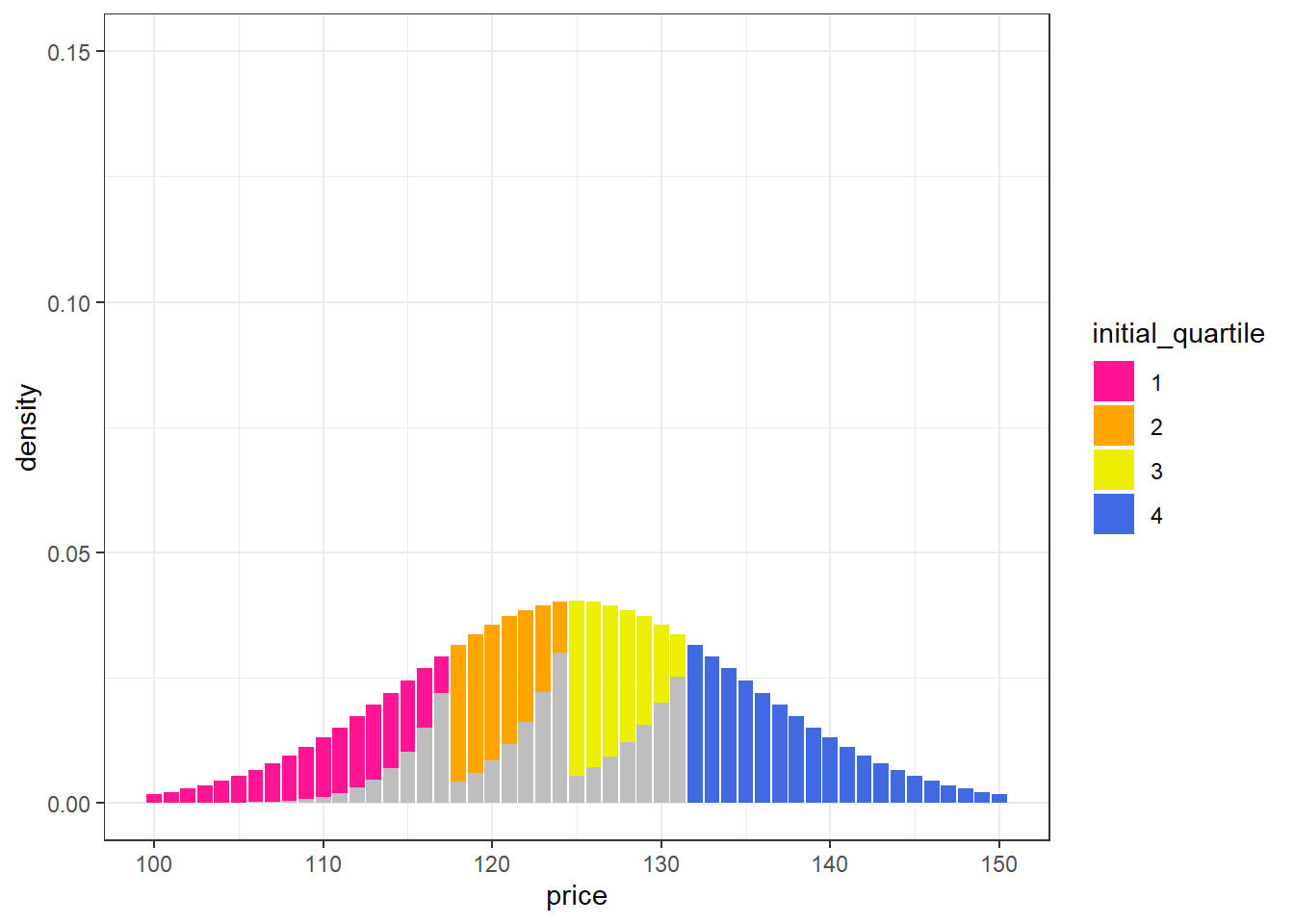 The greatest proportion of deals were moved from orange to yellow and from yellow to blue. Pink to orange had the least amount of movement (due to the first quartile being spread across a wider range).

Because these incentives slide deals from lower prices to higher prices, those cut-points that are just above the most dense parts of the distribution have the biggest impacts on the post-incentivized distribution. For a normal distribution, such as this one, that means incentives just to the right of the first quartile have the smallest impact. (Importantly, this assumes susceptibility to rightward mobility is evenly distributed across the starting distribution.)

For many reasonable assumptions5, having more thresholds will lead to greater movement upwards in the distribution. Similarly, a continuous application of incentives (i.e. sales reps get higher compensation for every point they move up on the distribution) can be optimal under certain assumptions as well6.

Thresholds for incentives could also be adjusted dynamically. For example based on a rolling average of the quartiles of recent deals. In this approach, you apply initial incentives and then allow them to change dynamically depending on the resulting distribution of deals – setting guard rails where appropriate. An advantage to this dynamic approach is that the compensation rates gets set based on behavior7 – which is helpful in cases where you may not trust your ability to set appropriate thresholds.

Simulating the expected outcome based on assumptions such as the ones described in this post are helpful in thoughtfully elucidating the problem for yourself or for others. Assumptions do not need to be perfect to be useful for thinking through the problem but they should lean towards the actual patterns in your example.

How do Incentives Aggregate?

It could also be that there is a ‘correct’ size of incentive and that too small an incentive makes no difference but a large incentive has diminishing returns. If this is the case a logistic function or other ‘S’ shaped function may be more reasonable for modeling the influence of incentives.

How does Influence Degrade With Distance From Incentives?

In this case, we are assuming the influence of an incentive exponential decays (the influence decreases by 25% for every point we move from the cut-point). Hence being only a few points away from a cut-point has a big impact, but the degradation is less with each point we move away.

How is Slack Distributed

I assumed slack (i.e. the possibility of deals being influenced by incentives) was equally distributed. (It could be that slack is distributed disproportionally towards the lower ends of the distribution for example.)

How to Set Assumptions

For now I’ll pick some overly simple but sensible values for each question:

Ideally the organization is able to take into account risks and advantages in pricing and set-up incentives that are focused on overall profitability and firm growth (not just in terms of a single factor).