Gambling Where the House Almost Always Loses... but Still Wins

In this post, I will describe an example of a game that produces many small wins for the player and occasional large wins for the house. Such a game could take advantage of psychological biases of individuals to prefer gains to be disaggregated and losses to be aggregated1 as well as a general disposition for accepting small sure-things when it comes to gains and a willingness to chance higher-risk scenarios in order to avoid paying losses (see Note on Prospect Theory for why these assertions may be inappropriate for the games I describe).

A negated roulette wheel (where the point is to avoid, rather than land on, a specific number) provides a simple example of a game that captures these dynamics2.

All types of games described in this post would need to be empirically evaluated in a gambling / gaming environment. The ideas are very much in a draft form3. The games discussed align with some psychological biases while potentially running counter to others4 – reading more on prospect theory and related ideas is required to more carefully consider approaches in game design5. See Note on Prospect Theory in the Appendix for a retrospective discussion on errors I make in this post in applying psychological biases to gambling.

On Wednesday’s I co-lead an internal study group on Pricing Strategy. We just finished week four of Customer Value in Pricing Strategy. The material in this section is devoted almost entirely to the various conditions under which people behave ‘irrationally’6 and how / when a firm can manipulate the psychology of customers to demand a higher price for their products. The subject matter is rife with ethical dilemmas; setting these aside, the material sparked an idea for a new spin on games and gambling.

There are a few psychological phenomena from the course that are important primers.

An example in the course is that, faced with the scenario below, people will tend to go for the sure thing and win $50 rather than the chance at gaining $100 (even though each option has the same expected value). 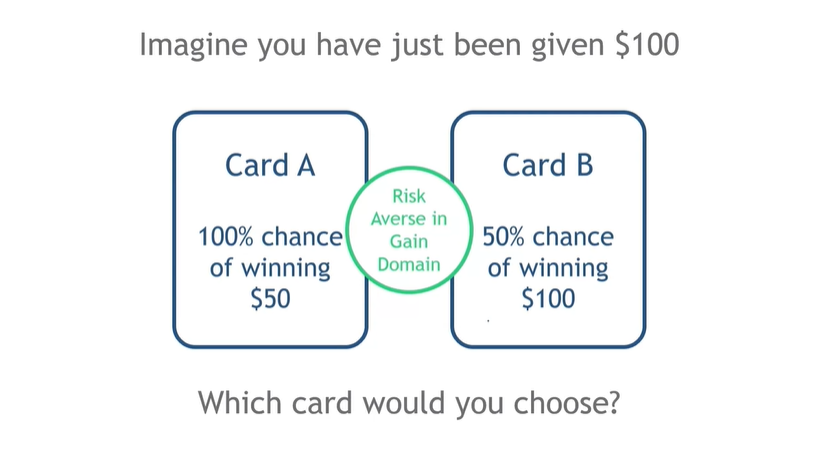 Though when facing potential losses, people prefer taking their chances and will tend to select the option with the risk of a greater loss (for the possibility of avoiding the loss entirely). They will choose a 50% chance of losing $100 (to avoid a guaranteed loss of $50). 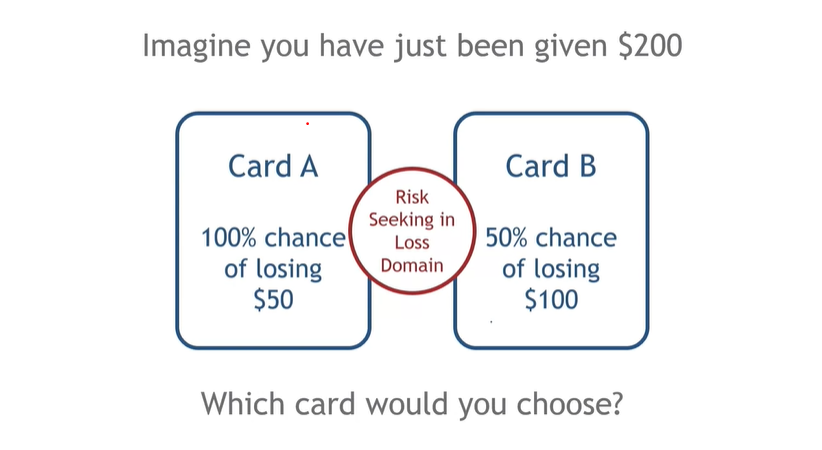 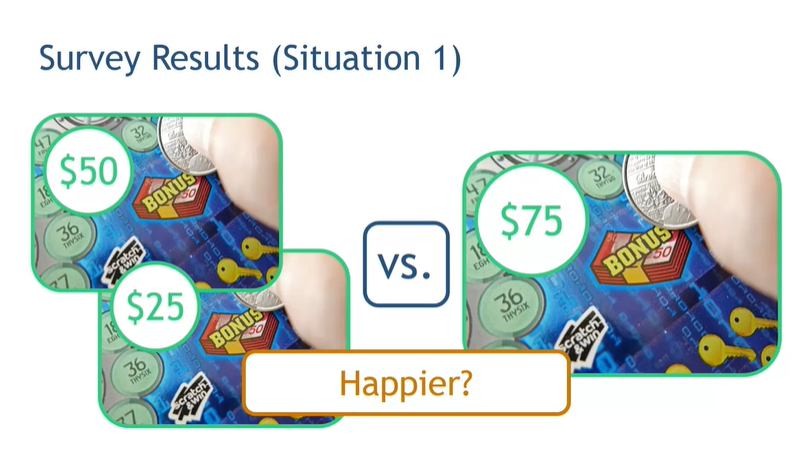 However people prefer taking losses in aggregated forms. As described in the course, they usually prefer receiving one large bill over multiple smaller bills: 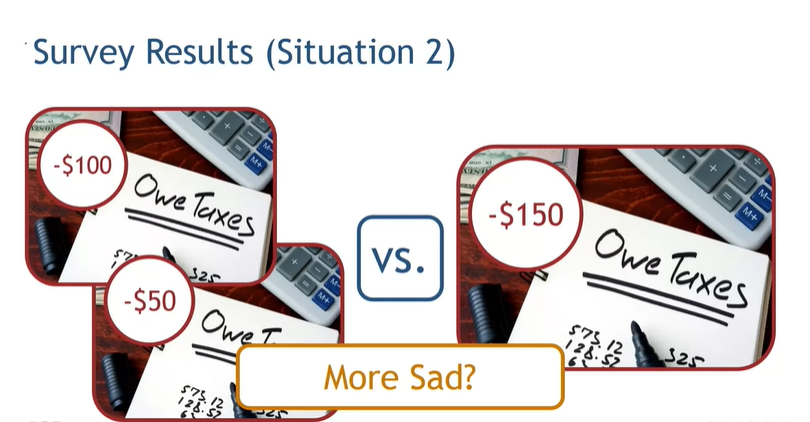 Even though, as with the previous examples, the value of the events are equal7.

Many lotteries, slots, and other forms of gambling run counter to these particular psychological phenomena8. They offer repeated guaranteed initial losses (the quarter you put into the machine, the scratch ticket you buy from the counter, etc.) for the chance at a large payoff (winning the jackpot).

I thought an interesting set-up for a game would be one that flipped this and made the player very likely to win a small amount each time they played but that always carried the risk of a single large loss9.

As an example, imagine a roulette-like wheel numbered from 1 to 10. You are instructed to pick a number. As long as you don’t land on that number you will win $5. If you do land on it you will lose $50 (or something along those lines for whatever size of bet10). This particular bet would yield the casino an expected value of 50 cents11. It also yields the player the excitement of an expected nine wins in a row12. The advert for the game might focus on the idea of “Tempting Fate13.”

You could blend these ideas with other common gaming features. For example, you might have a mix of ‘big losses’ and ‘big wins’. Carrying on from the previous example, the wheel (numbered 1:10) could be set-up where the player selects a number for a ‘big win’ ($50 gain), and two ‘big losers’ ($50 loss for either), and the rest resulting in small wins ($5). The expected value for the casino on this set-up is now $1.5014.

There are a variety of forms this game could be tested in – it doesn’t have to be a roulette-like wheel in a casino (I actually think an app or more gamefied environment may work better15). The novel feature is ensuring players get repeated high-likelihood small wins while having them pay their losses in one-off large losses (rather than small incremental payments).

Section added after writing post and after reading a little more on Prospect Theory.

The course materials I reference in this post are themselves referencing research on when a player is facing either only gains (guaranteed gain vs possible gain) or only losses (guaranteed loss vs possible loss). However in gambling the problem is mixed. Players face both the possibility of gains or losses on any given bet. Khaneman describes the differences in the mixed case in Chapter 26, Prospect Theory of his book Thinking Fast and Slow:

“In mixed gambles, where both a gain and a loss are possible, loss aversion causes extremely risk averse choices. In bad choices, where a sure loss is compared to a larger loss that is merely probable, diminishing sensitivity causes risk seeking. There is no contradiction. In the mixed case the possible loss looms twice as large as the possible gain.”

This suggests that my assertions throughout later parts of this post regarding risk seeking behaviors are likely incorrect16. This misapplication however might not present as much of a problem for my references of people’s preference for aggregated losses and disaggregated gains. Hence at least part of my justification for hypothesizing a game like “Wallet Roulette” may be applicable17.

It remains possible that multiple gains may represent greater value than a single larger loss. The chart below shows a typical example of the asymmetric S-shaped value function associated with gains/losses in Prospect Theory. Even with its asymmetry (whereby losses are felt more intensely than gains) it is clear that three gains (i.e. wins) of $0.05 would more than offset a single loss of $0.15 (assuming the value derived from individual gains can be aggregated linearly). Hence the types of games I describe may still be worth exploring in gambling contexts. 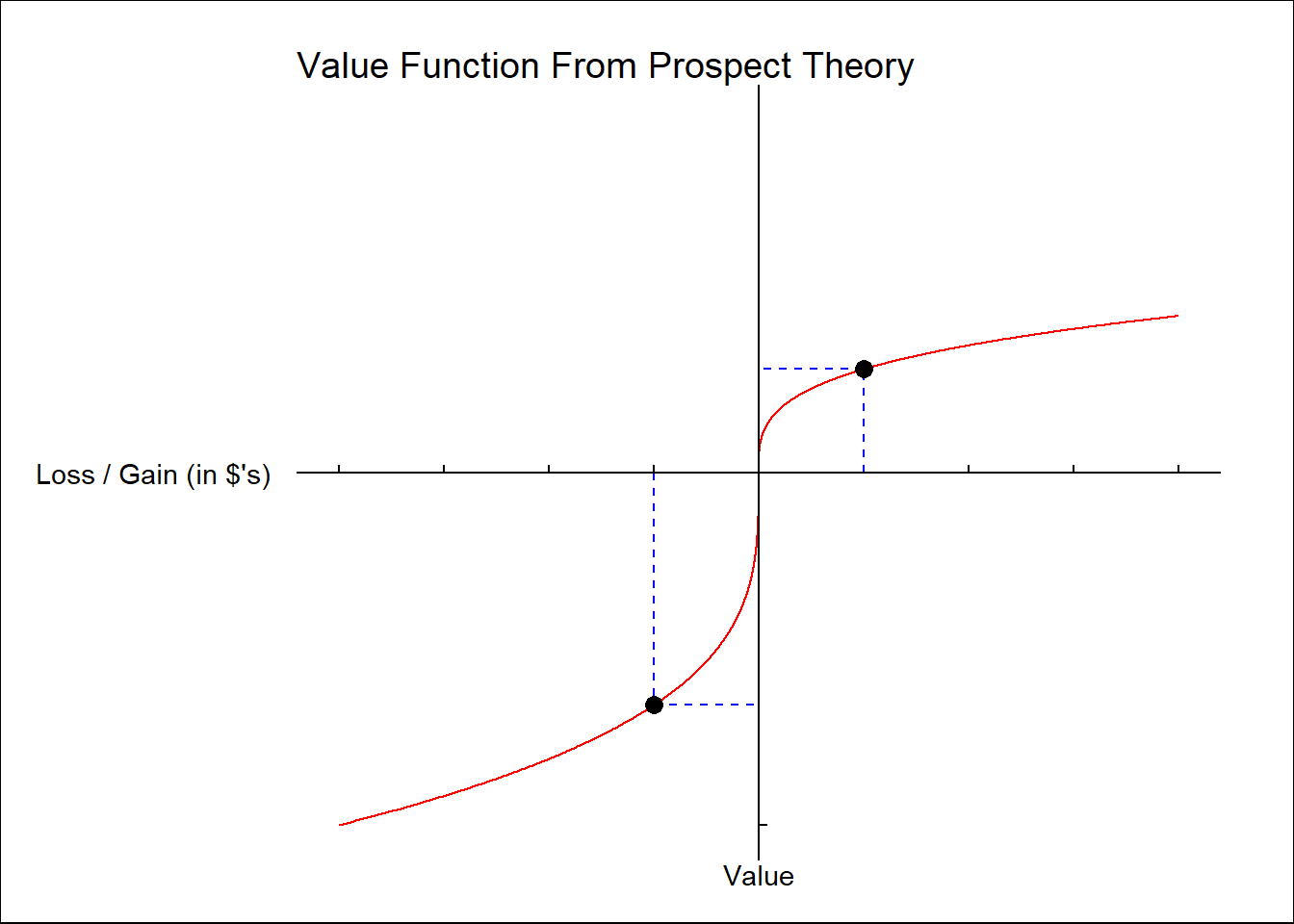 (Note that a previous version of this post had linked to a figure from Wikipedia. The current version was created using the ptvalue() function for the “Prospect Theory Value Function” from the econocharts package in R.18)

One explanation for why people gamble at all is people’s tendency to overweight the likelihood of rare events19. While this explains participation in lotteries and sweepstakes it does not explain all forms of gambling. These other forms of gambling present additional challenges for Prospect Theory20 to explain. Nick Barberis explains why a Prospect Theory agent may choose to gamble in A Model of Casino Gambling, where he writes:

“What is the intuition for why, in spite of loss aversion, a prospect theory agent might still be willing to enter a casino?… We show that, if the agent enters the casino, his preferred plan is to gamble as long as possible if he is winning, but to stop gambling and leave the casino if he starts accumulating losses.”

The games I describe may appeal to this particular type of agent in that the games would be designed for the player to accumulate wins.

The paper describes gamblers with different starting profiles. Variety in motivations and behaviors of gamblers opens the possibility that the types of games discussed in this blog post may appeal to a certain set of players (particularly those that are motivated by the feeling of winning rather than an overweighting of the tails of the probability distribution that likely motivates participation in lotteries and sweepstakes21). I would also suggest that there is ample room to improve the value players derive from slot machine like games22 by applying ideas from Prospect Theory and other research into human behavior23.

Below I will describe the rules for a game that I’ve come-up with called “Wallet Roulette24” that is designed to take advantage of the ideas described in the post above25. The game is set-up to look and feel somewhat similar to a slot machine but with a win / loss structure that is almost the complement of that in slots26.

The virtual game is set in a dingy bar-like setting with shady (though cartoonish) figures holding wads of cash in their hands and crowded at the edges of the screen. They stare at you expectantly. A sinister looking attendant standing behind the bar administers play.

The game begins when you take a wallet, fill it with money (your bet) and place it in front of you. A gun, a revolver, with six chambers in it is pointed at your wallet. The round starts when you fill one of the chambers with a bullet, spin the cylinder, wait for it to come to a rest, and pull the trigger. If the gun fires, your wallet explodes and the money flies out and is scooped up by the shady figures. If it clicks (having landed on an empty chamber) the attendant grimaces and slides some money to you from across the counter27. You then decide whether to play another round (filling a new wallet with money if your previous one had exploded) or you take out your money and leave.

The game options below are some top-of-mind notes regarding features, options, and gameplay for “Wallet Roulette.” This is neither a necessary nor exhaustive list29.

When describing payout rates for particular game configurations, I stick with an ~83.3 to ~91.7 cent return on every dollar gambled for the player (so will usually report what the event would look like at each of these payout rates).