We were out the door by 7:45AM and headed for the Blue Lagoon (where my parents had offered to treat us for the day). The regular Blue Lagoon pool had sold-out of tickets. Instead, we were ‘forced’ to get tickets to the Blue Lagoon Spa Retreat – setting the stage for the most luxurious four hours of my life. 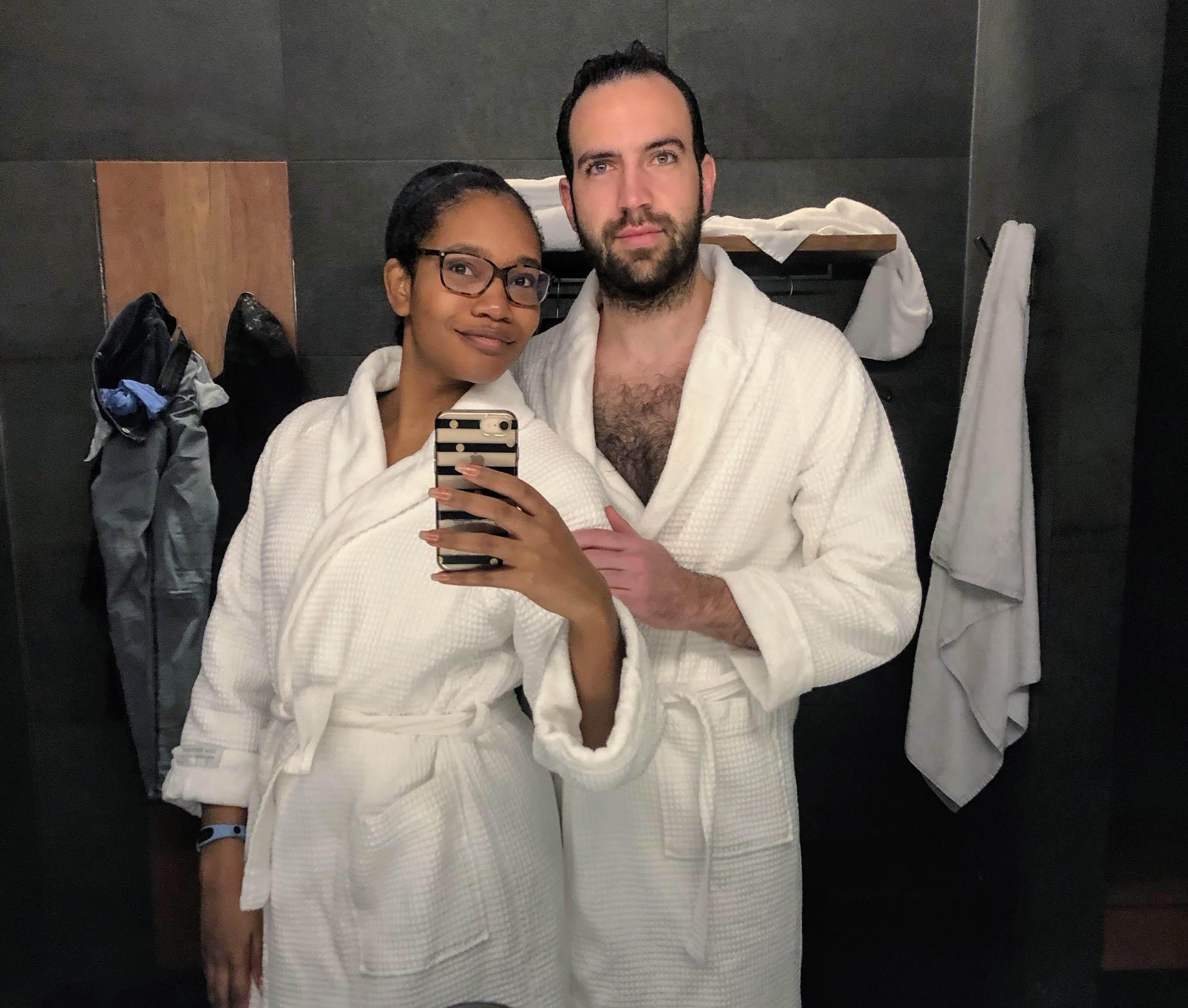 In addition to access to the main lagoon, the retreat included four secluded winding pools that were perfect for laying back and slowly floating down. Everything was open and empty, it felt as though you were laying back in the mouth of your own personal volcano. There were also saunas, steam rooms, self-service salt scrubs, fire pits, even an on-demand photographer for goodness sake! 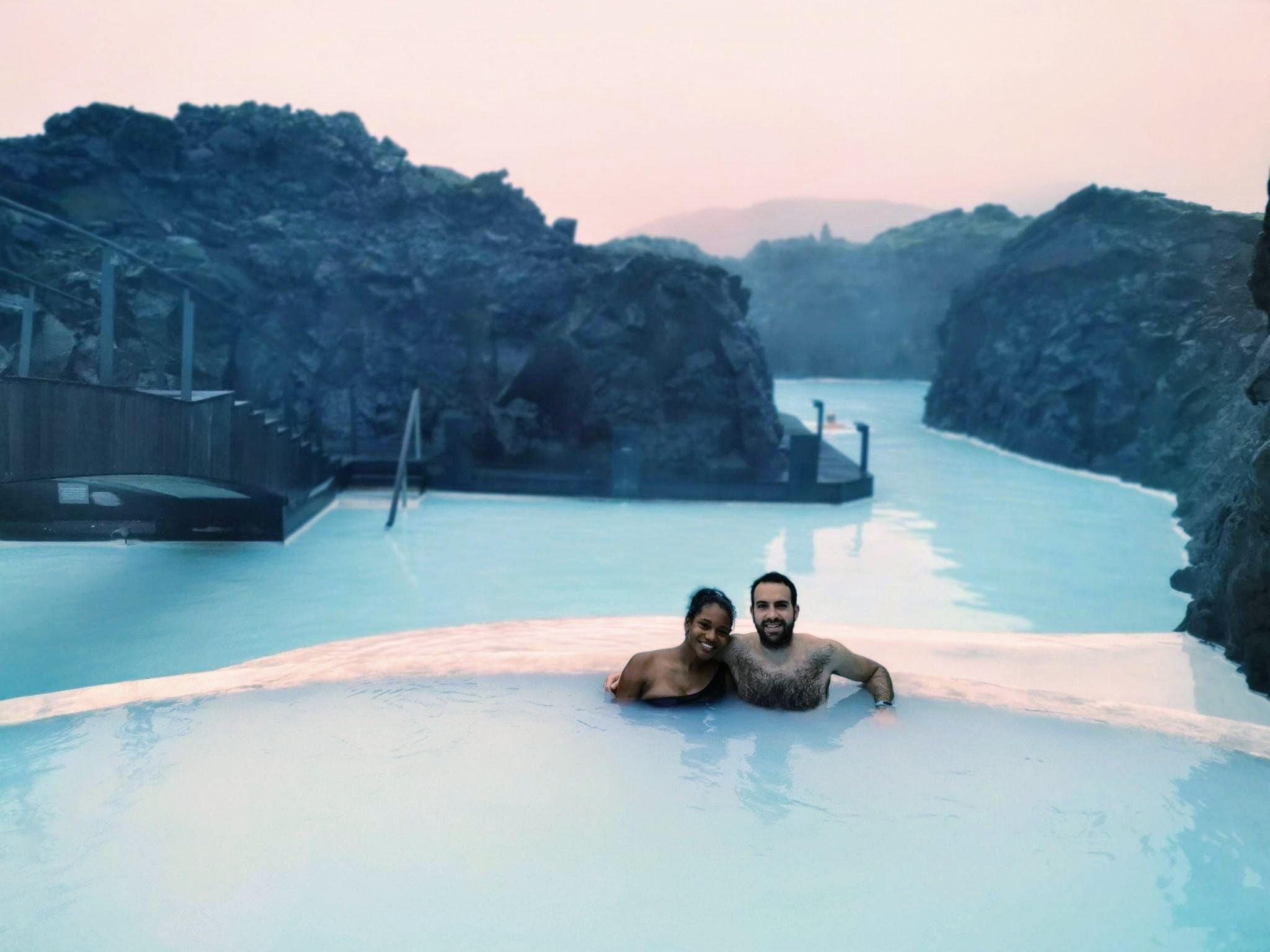 Part of the winding pools in the Blue Lagoon Spa Retreat

My parents also gave Britney and I their water massages because they said they simply “Wanted to spend the whole time together.” This may sound cute but was actually just bad decision making.

The water massage starts when “Chad” – muscle bound in a tight black nylon tank-top – invites you to lay onto a foam bed floating on the water. At first you may feel up-tight, but in his powerful arms and instructions to “make your limbs like wet spaghetti” you surrender yourself. Chad covers you with a warm water-soaked blanket and then cradles you while massaging every part. Floating there and safe in his arms you will never get so close to returning to the womb.

We spent ~4 hours at the blue lagoon, drinking, eating, soaking, and relaxing. When we got back to the Airbnb, Britney laid back for a nap and fell asleep with a slight upturned smile that was a picture of serenity. 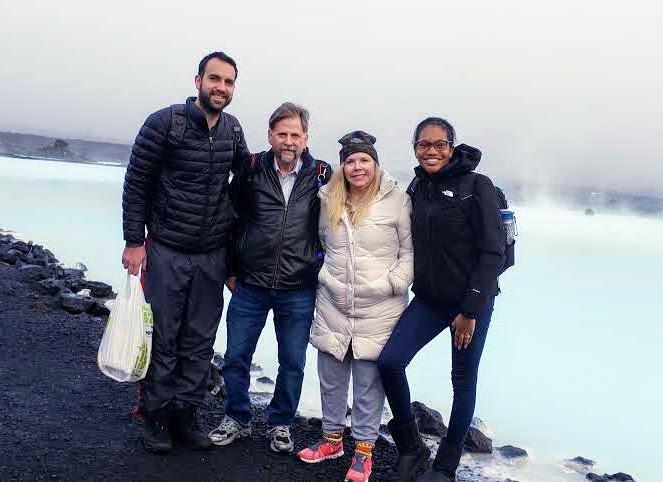 I took this time to continue my wanderings through Reykjavik. I stopped for some local Rhubarb flavored ice cream1, then picked-up black volcanic table salt for my parents2 and mushroom hot cocoa mix for Britney3. I stepped into a clothing store (that was in view of the Christmas Cat) and purchased a locally woven wool scarf-blanket on behalf of my mom (which she gave to Britney to serve as a warm memento of the trip). I continued on my way, stopping at important sites across the city. 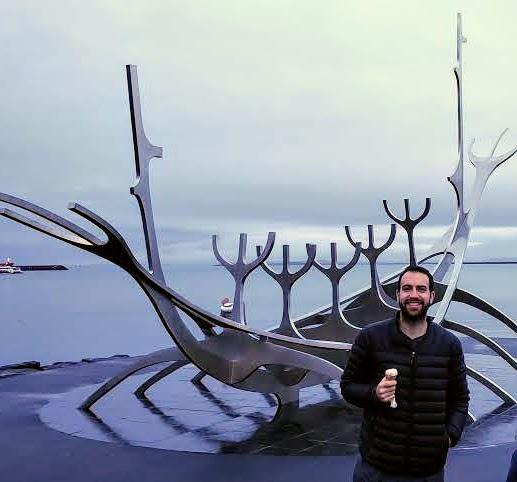 The “Voyager” statue behind me commemorates the Viking explorers and freedom

Before returning to the apartment I went by the Hallgrimskirkja church courtyard and scoped out ideal spots for fireworks viewing. Iceland’s New Year’s celebration features one of the most impressive fireworks displays in all the world. Each resident spends several paychecks on fireworks (the selling of which is used to raise funds for public services) which are then set-off with increasing frequency leading up to midnight4.

For dinner, dad, Britney, and I went down to an Italian place on Reykjavik harbor named Caruso5. Dad and Britney ordered pasta while I ate lamb. Once again, everything was delicious. Dad told stories about the history of lean-agile software development; I mostly looked out the window and enjoyed the water.

We drove back to the Airbnb and laid on the bed for a few minutes. Britney and I were starting to feel worn down6. We eventually assembled ourselves and headed for the outskirts of Reykjavik to attend a traditional New Year’s bonfire event7.

We could see the fire at a distance from our approach; the flaming orange stack stood over two stories high. Britney had me give her a piggyback ride across the wet grass; I sloshed us over to the encirclement. We arrived just as the locals were singing a final Icelandic song and throwing the last few planks of wood onto the blaze.

The sounds of the crackling wood were mixed in with amicable banter between us and a German couple with whom we compared itineraries. The park gave an expansive view of the city, which was starting to come alive with fireworks. Flashes in the distance left sparkling plumes that alighted over the massive conflagration before us. I sipped a poorly concocted mushroom cocoa & coconut vodka mix from a thermos and basked in the heat.

I asked a local if there was any hidden meaning in the bonfire. I posited (paraphrasing here), “Is the destruction in the flames symbolic of the transformation that comes with a New Year? The fiery brilliance a celebration of the volcanic beauty of the country?” He assured me there was not any special significance and that in Iceland (like many places) they simply liked to make big fires at parties.

We headed back to the Airbnb. Britney started to pack our stuff-up. I sat on the balcony and watched the fireworks sparkle across the city. At 11PM the fireworks paused as 90% of Icelandic citizens went inside to watch an annual cultural comedy sketch-show. Britney and I pulled-up an English subtitled version of the 2018-2019 episode. We found most of the bits funny and prided ourselves on how earnestly we felt we were appreciating the local culture8.

These fond feelings soon soured though when we realized that, if we’d left 5 minutes earlier, we could have beaten the locals out and made it to a prime location in front of Hallgrimskirkja church9. Instead we got caught in the deluge of people reclaiming their spots and had to settle at the edge of the courtyard, pressed against the buildings. We still had a great view but I was jealous of my parents who had left only minutes before us and were now seated at the exact location I had picked-out10.

The fireworks started to pick-up again. Explosions came in different colors from all directions. The show felt layered, distant rockets from disparate launch sites cascaded across the sky. Smoke clouded the landscape and captured the light making each new flash brighter than the one previous.

Britney and I went back to the apartment around 12:30AM. Britney went to sleep early11, I stayed up watching the fireworks from our balcony.

Dad texted me the bar where he and mom were. He misspelled things terribly but I eventually figured it out and headed down to meet them. Mom didn’t know dad had texted me so was overcome with excitement at the seemingly serendipitous event of me ending up at the same bar as them (an idea I didn’t spoil until the next morning). She’d made friends with a Swedish couple. They exchanged numbers and plans to visit each other in their respective countries12.

I drank hot cocoa and Moscow Mules and told stories about my wonderful bride-to-be. The Swedish woman told me tales from her trip. She showed me a picture of her and her husband in front of a beautiful aurora but explained that she actually hadn’t seen it with her naked eyes. Their ‘aurora guides’ had needed to use a high-exposure cameras to pick-up the light13. She described the whole ‘aurora hunting’ tour as a ploy only good for capturing instagramable photos. I felt proud of the few wispy seconds Britney and I had caught the night before on our drive back from Diamond Beach.

My parents thanked me for compelling them to stay up to watch the fireworks for the New Year’s Eve celebrations. They staid out while I went back in. I laid down next to Britney. Fireworks pounded at the windows but I had no trouble sleeping.