Britney and I awoke several times in the night to the frigid cold. We would run across the street to a patch of trees where we could relieve ourselves and get away from the streetlights. I looked up to the stars and the clear night sky clinging faintly to a hope that whatever damage might be done to the car, it was all part of a plan for us to be at this exact point. For what? – maybe to see a brilliant aurora. “What’s an engine compared to a bucket-list experience?” I’d try to convince myself. The stars were beautiful but there were no dancing lights this night to ease my conscience.

In order to fall back asleep I had to put my head completely under the blankets and make my breath into a mini-heater (we didn’t turn the car on out of fear of damaging the engine). This made me claustrophobic and mildly concerned about CO2 poisoning but was better than letting the icy air get my face. I finally got some sleep. (When we eventually got the car working we had to scrape the ice off both the outside as well as the inside of the car.)

I got-up a little before 9AM and tried calling ‘Mr. Kristy’. It didn’t connect, I had the wrong number. I put my boots on and ran down the street to a rental car company that was just opening. The manager there pointed me to a car repair shop two stores over. At the shop they mentioned a Mr. Kristy – I cheered (Kristy it seemed specialized in fixing this issue for Nissan’s – which he apparently did a dozen times a day in the summer months). They called him, he said he’d be there in ten minutes.

I ran back to the car. In 30 minutes, we were fixed-up with no damage to the engine, the correct gas in the car, and a fair fee paid. PRAISE!

We adjusted our plans so that we’d get to Diamond Beach around sunset and then would drive back to Reykjavik at night (and hunt for auroras). On the way to Diamond Beach we stopped at various stunning water falls along the coast. 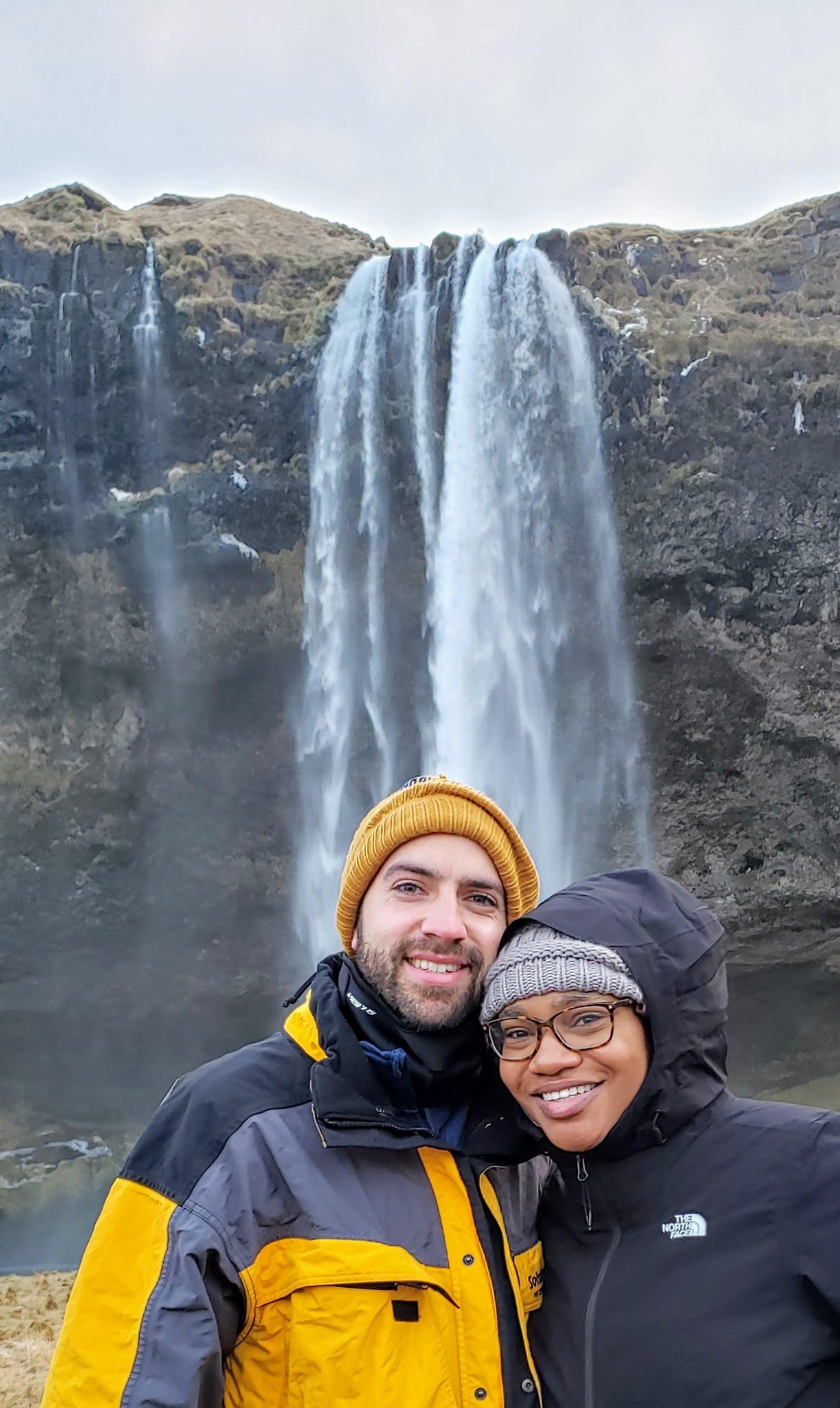 At the top of Skogafoss Falls were thousands of bird nests1 2.

Our 4-hour drive took us over a diversity of landscapes that included rocky deserts, cliff faces with frozen rivers, and multi-mile wide beaches formed from glacial movements. It was a dazzling drive. 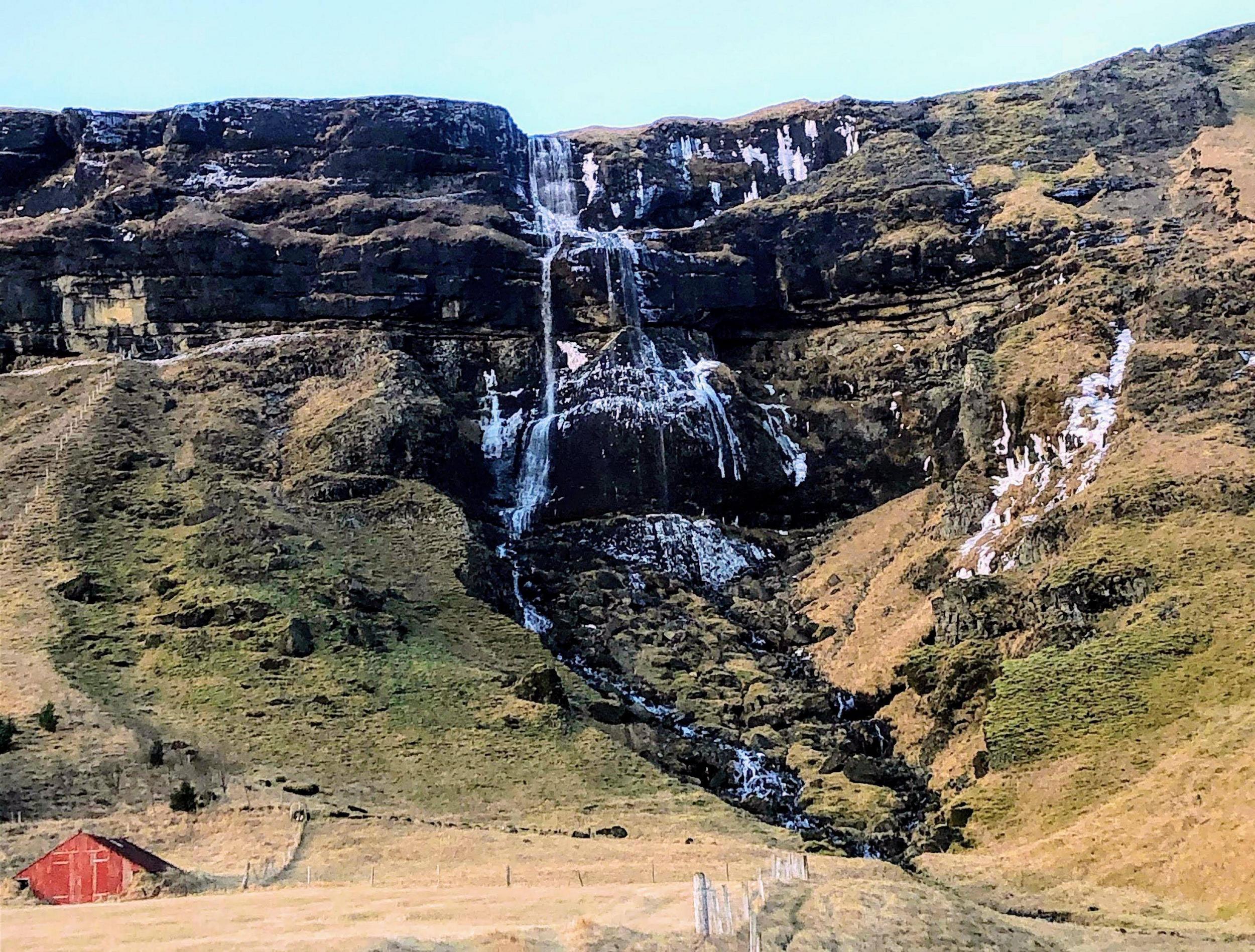 One of dozens of small frozen waterfalls we drove past

The first black sand beach we stopped at was Reynisfjara. Reynisfjara has a pedestaled cliff face that you can easily climb-up and overlook the crashing waves from the North Atlantic ocean. 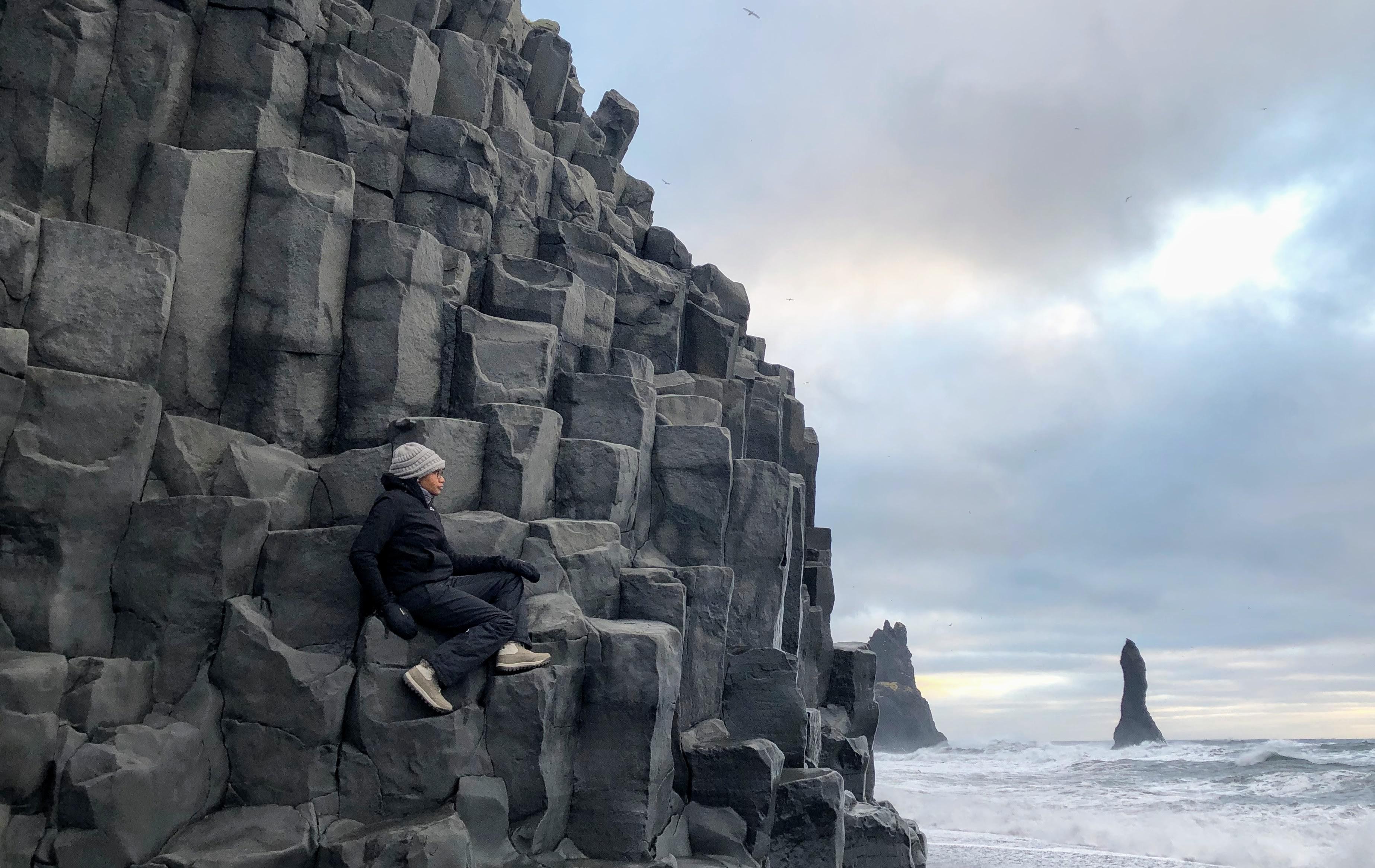 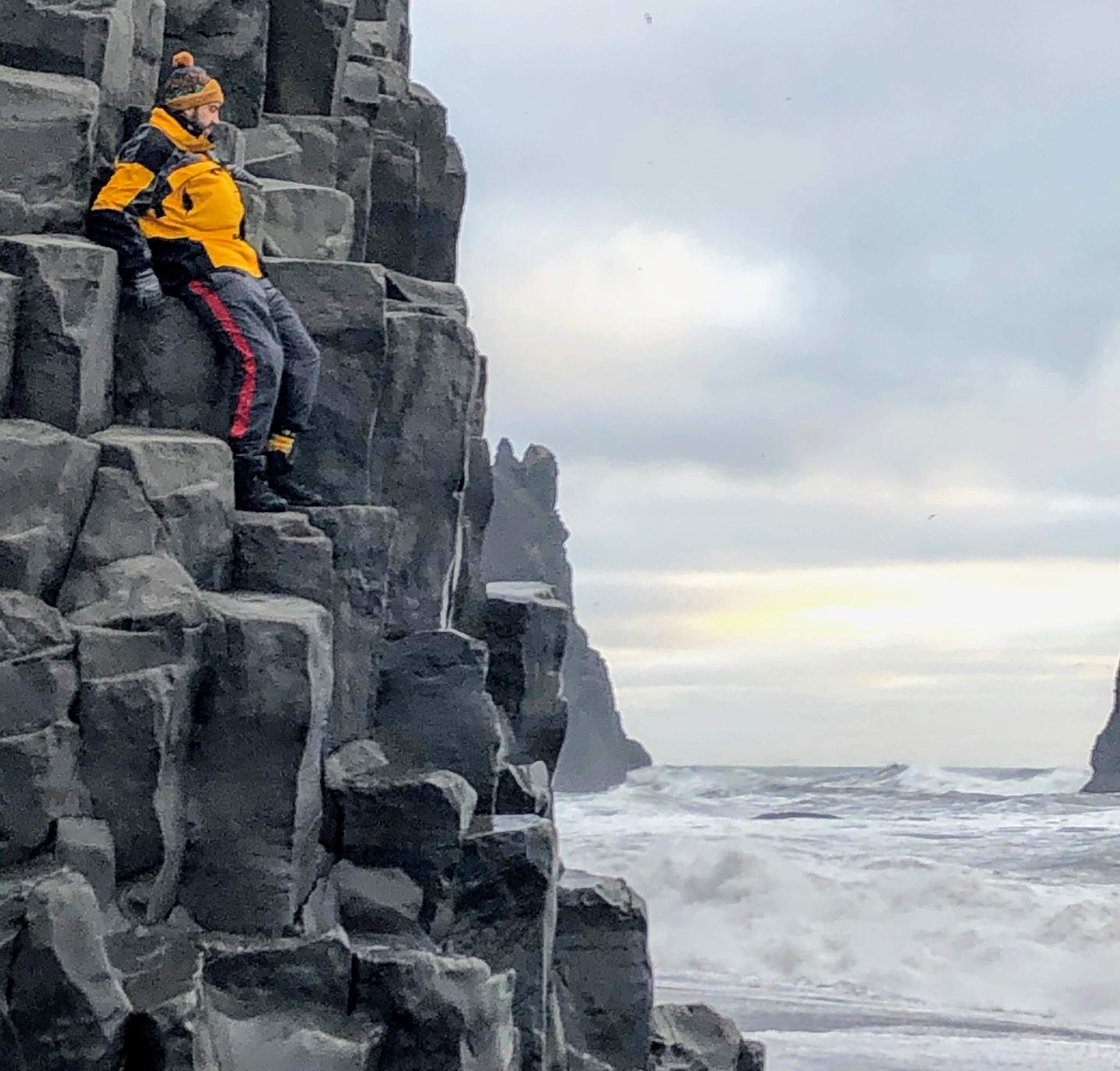 At the edge of the ocean are the remains of ancient basalt rock columns. Icelandic legend has it they were formed by trolls stopped in their tracks and turned to stone by the dawning sun. 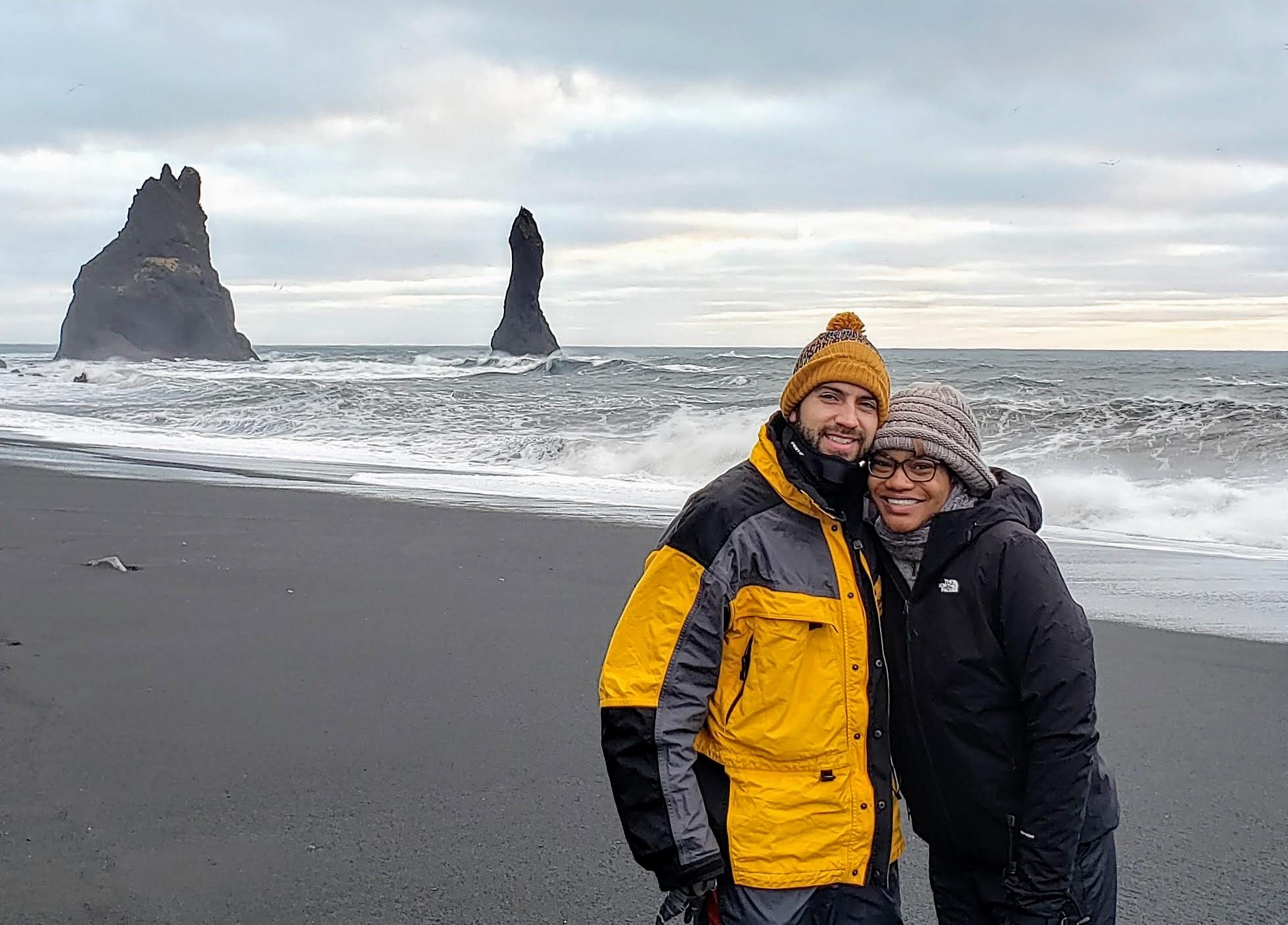 At the far side of the beach is a shallow cavern of glistening jagged rocks. A light drip of water was falling from overhead.

On the way to Diamond Beach our longest stop was a hike we took up Skaftafell falls. The waterfall inspired the design of the famous Hallgrimskirkja church near our apartment.

We finished our hike and raced to Diamond Beach where we caught the last glimmers of daylight. The ‘diamonds’ come from nearby glacial runoff that gets polished in the ocean and then washes up here as tremendous shimmering blocks of ice that blanket the black pebble beach3. 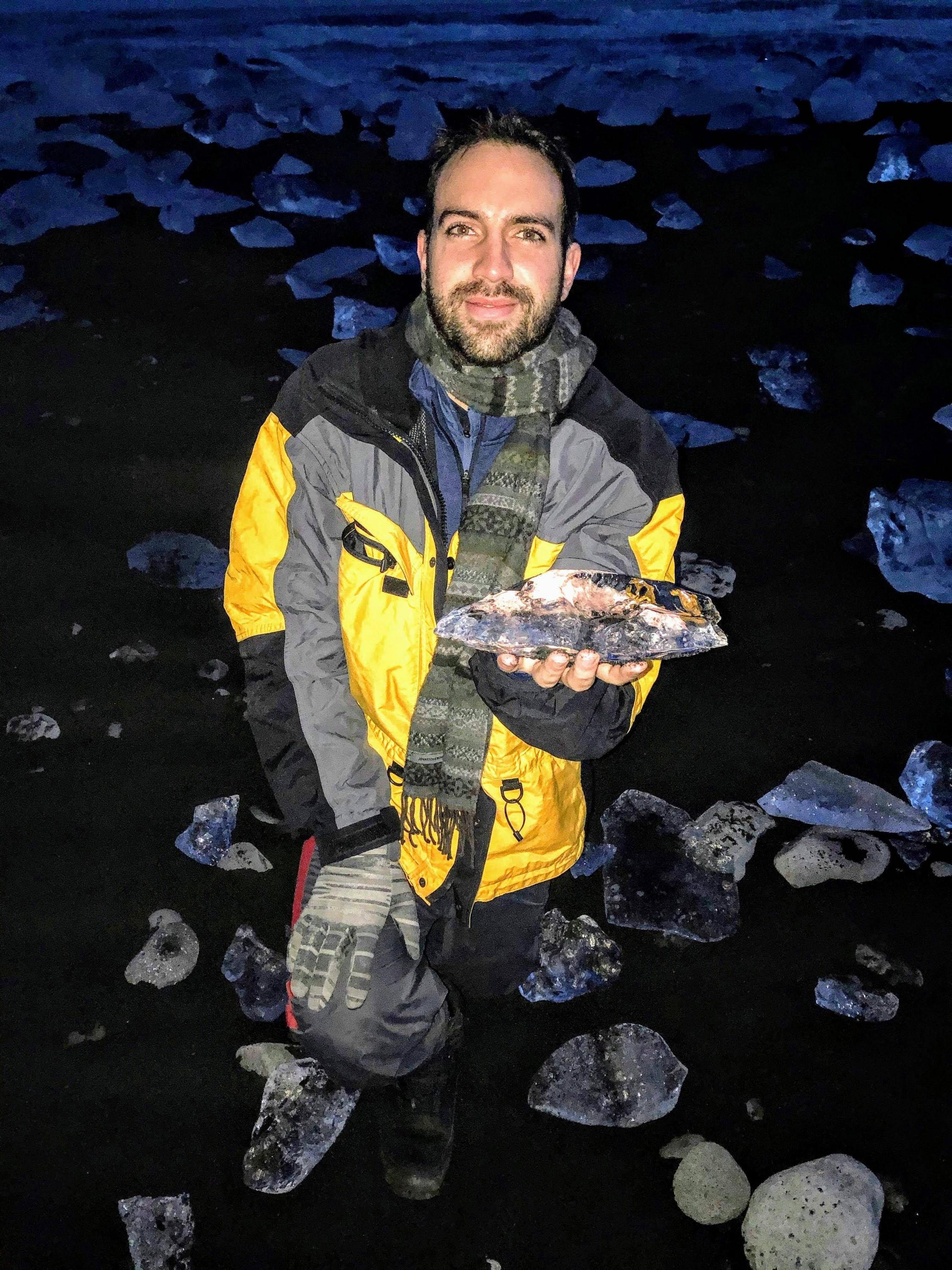 On one knee giving Britney this 10,000 carat rock 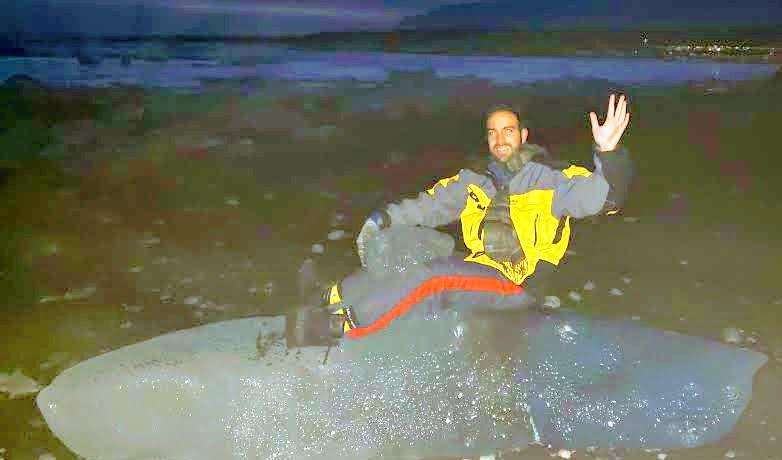 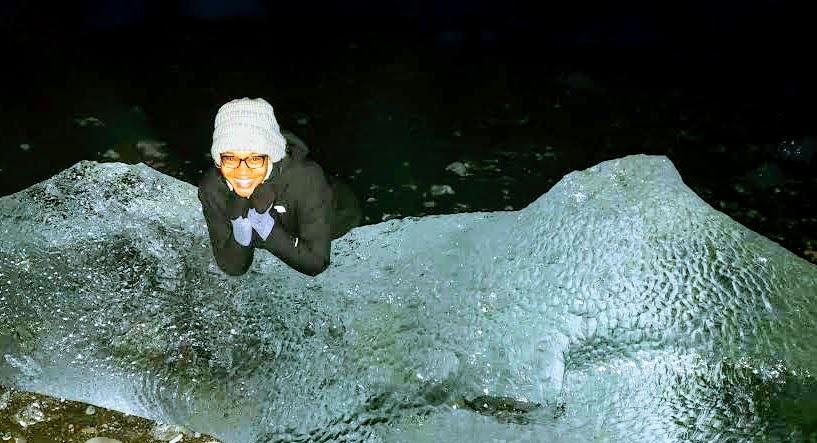 I laid there for a while. High tide started to come in and the approaching sound of massive ice blocks tumbling in the waves alerted me that it was time to head back. Britney took a nap in the car. I started us back West.

The return trip was more direct, we made just two quick stops. One in the town of Hof to see a church that looked as though it grew from the earth and belonged in The Shire. Another was an unsuccessful search for a geologic site we’d skipped over in our rush to get to Diamond Beach before sundown4.

The sky was clear now. We drove for long stretches with the windows rolled down peering at the unfiltered stars. Three hours into the drive Britney noticed a faint greenish-gray fluttering. We gasped and shouted excited confirmations to each other of what we were seeing. It was wispier than clouds but moved like liquid in the sky. In just a few seconds it dissolved into the blackness of the night. That ghostly image was the only glimpse of an aurora we caught on the trip. We should have pulled over at that spot as the sky soon filled with clouds and our hunting was over.