My parents, Britney and I landed in Reykjavik at 630AM. We’d taken an eight-and-a-half-hour overnight flight from Seattle. It was dark when we stepped off the plane and would remain dark until 11AM (in wintertime Iceland only gets 4-6 hours of sunlight a day).

I packed the bags into haphazard piles that poured over the rear storage area of our rented Nissan X-trail. The air was a cold mix of rain and mist. Dad struggled with the defroster and drove with a frenetic nervousness that was magnified by a lack of sleep, food, or familiarity with his surroundings. The first jerky turn launched a carry-on into Britney’s chest. For the remainder of the drive I strained to hold the luggage in place while everyone, except dad and I, caught up on rest.

It was too dark to see the landscape. The first interesting ‘sights’ were the abundant (though not ostentatious) Christmas decorations. We passed a complex of three 15 story apartment buildings where every room facing the highway had a Christmas tree with lights on in the window. 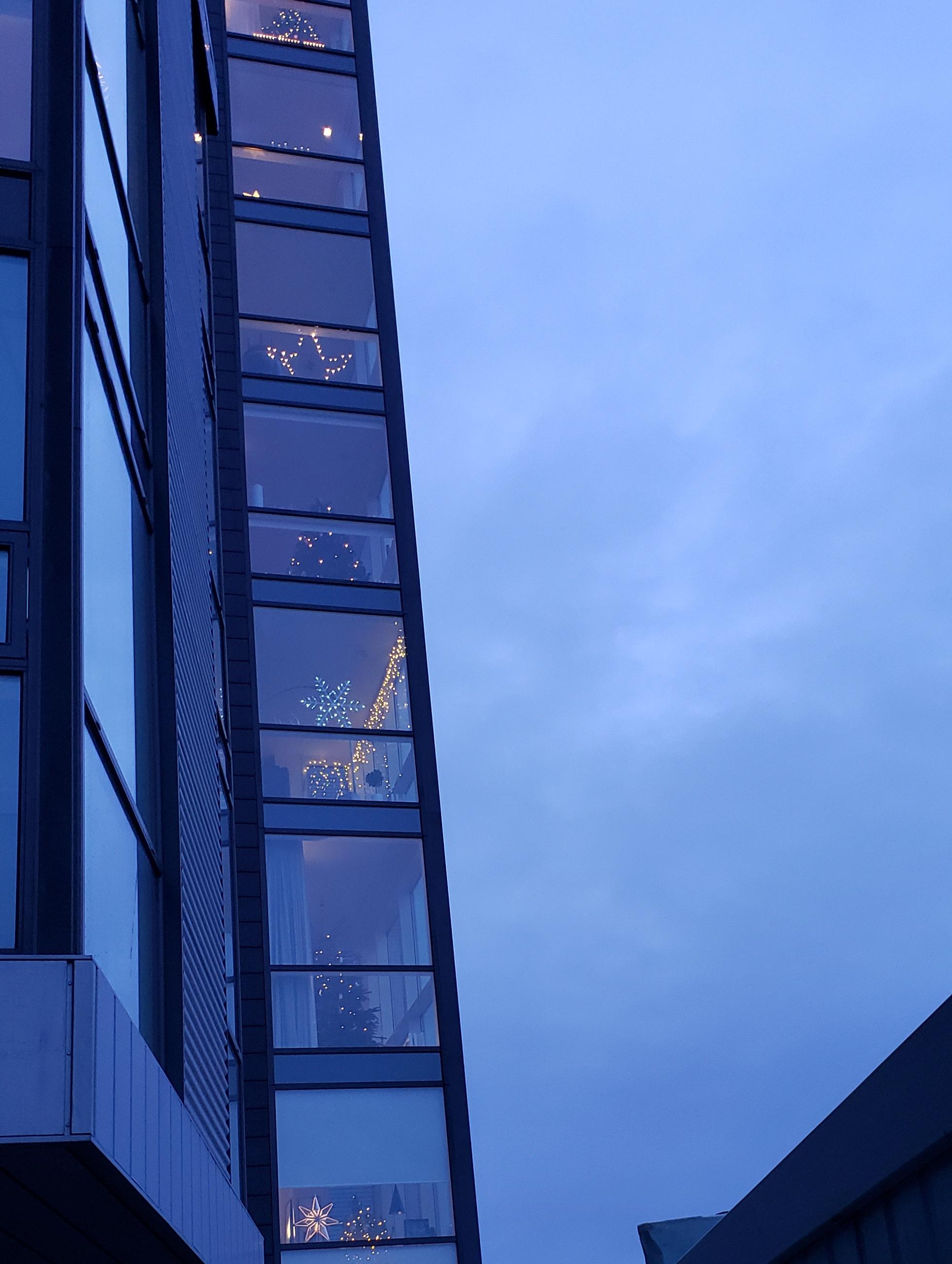 After a few missed turns we eventually made it to our apartment building. Britney and my Airbnb had a cute living room and a full (though miniaturized) kitchen. The bedroom was spacious (when there’s scarcity Britney tends to spread out and take over whatever space is nominally mine – be it on the floor, the bathroom counter, the couch, …). We were on the top story. Our ceilings sloped inwards accommodating the building’s roof1. The apartment was formed into a sort of trapezoidagon that forced us to duck at the edges of the rooms – if we weren’t tourists this would have been annoying but for us it added a perfect dash of charm. We had a balcony that faced the North end of the city and the ocean. Stepping outside you could see the spotlight from the Imagine Peace Tower (in honor of John Lennon) shining into the clouds from a nearby island2. Through the south window the top edge of the Hallgrimskirkja church (just a block away) peaked-out over the buildings.

My parents’ room was four floors below in the relatively spacious basement. Mom took a nap while dad, Britney, and I wandered the streets for food. It was still early, most places were closed but we eventually stumbled into a boutique hotel’s breakfast buffet. I had 5 carrot-beat shots, 4 cups of Skyr (Icelandic yogurt) parfaits, and an array of fermented cod (some of which I loved, some of which I really did not) and smoked salmon.

Britney and I planned on a 12PM “free” (tip based) walking tour but took a nap that lasted until 12:15PM so ended-up at the 2pm tour. It was still wet outside when we left. The wind and rain at times reminded us of that from our respective hometowns: it could be temperate, polite but almost passive aggressive, like in Seattle; at other times it whipped at your face and made you beg for mercy, as in Chicago.

On our walk to the Althingi Parliament House (the tour meeting point) we passed a 20-foot black metal feline structure with piercing red eyes and great yellow teeth. It looked as though it had been born in Hell and sprang from one of Iceland’s many volcanoes. From our guide we learned that it was a sculpture of the ‘Christmas Cat’ who, legend has it, would devour people that didn’t get new clothes for the holidays3. The Christmas Cat also worked as an agent of the giantess Gryla, an Icelandic (and murderous) version of Santa Claus, who snatched bad little children up to a cave and cooked them into a stew. Throughout the trip, whenever I got on Britney’s nerves she’d threaten she was going to call Gryla to come and get me. 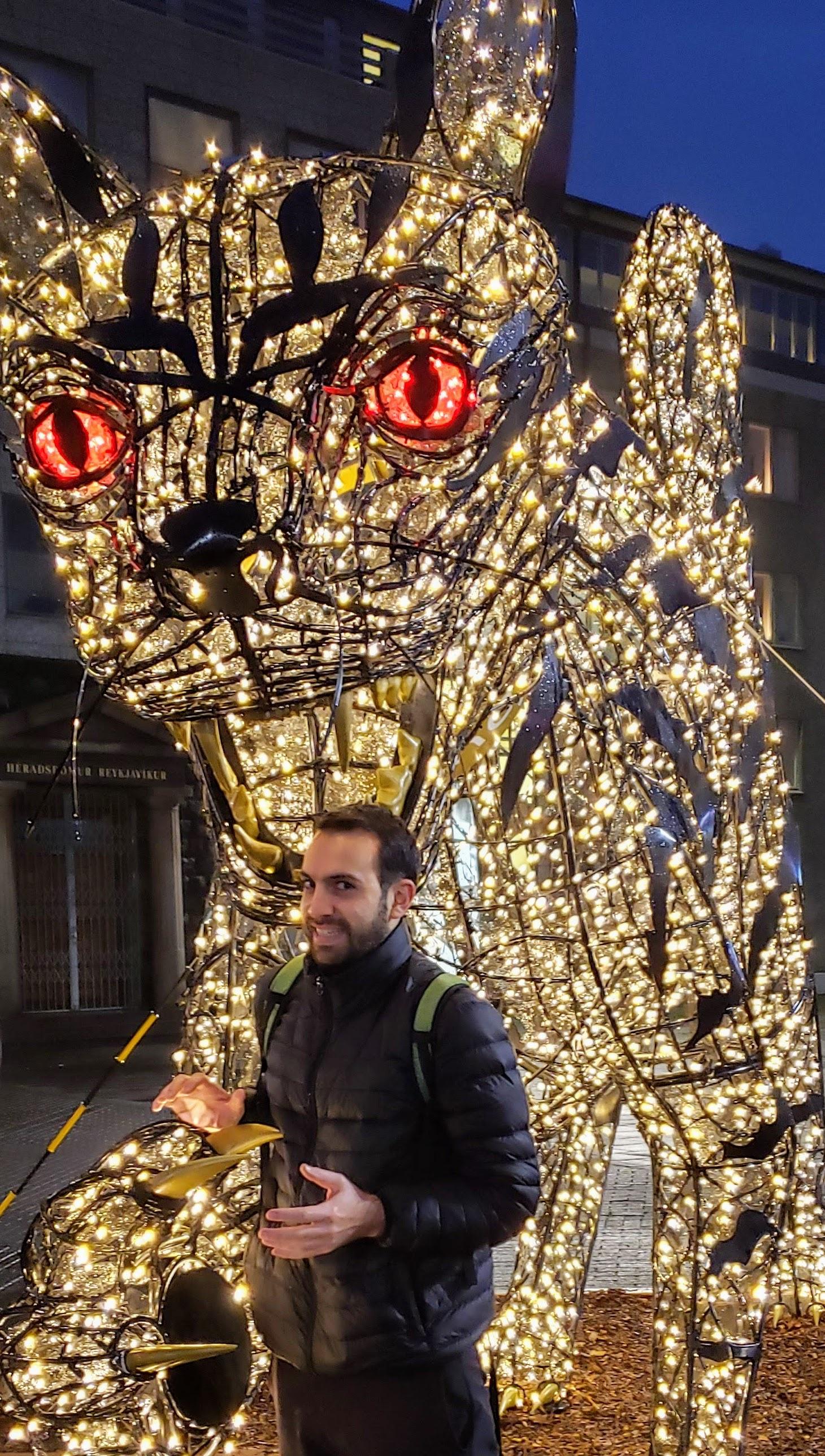 The Christmas Cat and I

Our guide Arik4 was good humored and welcomed the many questions I peppered him with throughout the tour. He also wore an oversized thick yellow jacket, similar to one I’d brought for the trip, which provided an immediate source of kinship between us5.

Rainbow street, in the distance you can see Hallgrimskirkja church

In back of the parliament building and just in front of Tjornin Lake was a statue of a man in a suit walking with a cube of stone over his head (get it?), named “Monument to the Unknown Bureaucrat”6. I asked Arik about politics in Iceland, and if people were frustrated with their leaders in the same way citizens in other (larger) nations tend to be. He explained that with a population of less than 400,000 people7 they have more direct access to politicians but contended there are still many of the same frustrations and a similarly wide range of ideologies. He also noted a greater concern with nepotism… I argued it was an issue in American politics as well. 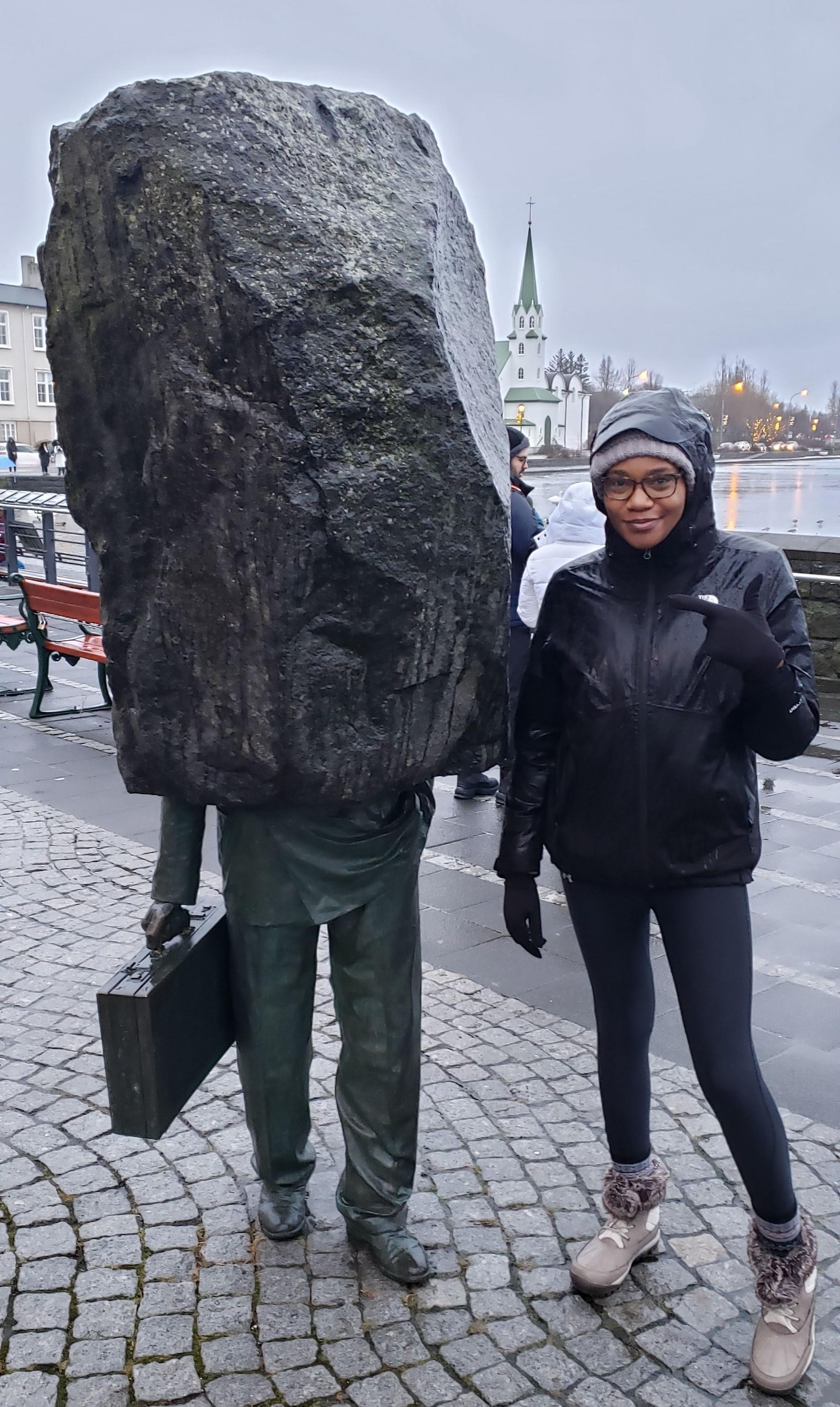 We ended the tour at the beautiful City Theatre of Reykjavik. As parting gifts Arik gave us chunks of licorice from local vendors and provided some closing notes about the country and its people8. I thought about continuing to chat with Arik and seeing if I might be able to get us invited to a local Icelandic house party9. However I started to get shy and all I could muster were a few increasingly random questions. I left a good tip and stepped away awkwardly.

That evening Britney and I went to an excellent seafood restaurant, Messin. We ordered Arctic salmon and Arctic char. Britney also got lobster soup as a starter (the first of five she would order over the course of the trip!). Everything was fantastic10 11. After dinner we got our day pack ready for the following morning and called it an early night.